The Civil War - The Confederates Will Probably Win - 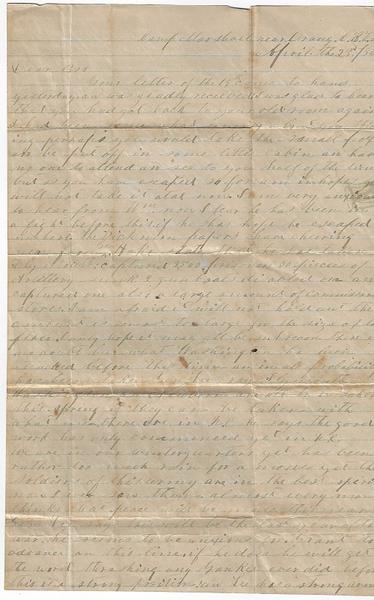 Excellent letter content. Cox is sadly and naively optimistic about Confederate war outcome prospects. He recounts the Confederate victory at Plymouth, NC and seems supremely confident that Robert E. Lee will be thoroughly victorious over Ulysses Grand in an anticipated big battle near his location. Cox's tone gives good insight into the viewpoint of the Confederate army morale at this time in Northern Virginia.

This letter is written on low quality Southern paper. Literacy is quite limited. Letter is transcribed as written, except some punctuation and capitalization added for clarity

Company "K" of the 52nd NC had the nickname "Fighting Boys". Most of them came from Forsyth County, NC.

Your letter of the 19th came to hand and was gladly received. I was glad to hear that you had got back to your old room again. I had been somewhat uneasy about you thinking perhaps you would take the smallpox and put off in some little cabin and have no one to attend and see to you half of the time, but as you have escaped so far and in hopes you will not take it at all now. I am very anxious to hear from Wm. Now I fear he has been in a fight before this. If he has hope he escaped and hurt. The Richmond papers have cheering news from Gen. Hoke (Confederate Major General Robert F. Hoke (1837-1912) state that he has taken Plymouth (Battle of Plymouth, NC 4/17-20/1864), captured 2500 prisoners, 30 pieces of artillery, sunk two gunboats, disabled one and captured one. Also a large amount of commissaries stores. I'm afraid it will not hold out, the amount is much too large for the size of the place. I only hope it may be so. I recon there is no doubt but what Washington (County, NC) has been attacked before this time and in all probability has been taken. Gen. Lee says Plymouth, Washington and New Bern are all to be taken this spring if they can be taken with what men there are in N.C. He says the good work has only commenced yet in N.C.

We are in our winter quarters yet; has been rather too much rain for a move. Yet the soldiers of this army are in the best spirits now I ever saw them. Almost every man thinks peace will be made this year. Gen. Lee says this will be the last year of the war. He seems to be anxious for Grant to advance on this line. If he does he will get the worst thrashing any Yankee ever did before. This is a strong position and Lee has a strong army also. Reinforcements are comeing in daily. Will soon have 100,000 men on the Rapidan. Will have to be one big fight somewhere in the country before long and no mistake if Grant done attack Lee soon, I think Lee will attack him. {True prediction: Nearby ten days later The Battle of the Wilderness May 5-7 resulted in 3700 deaths & 25,000 wounded, captured or missing, but results were inconclusive. The Southern army however could not afford the losses}. We are sending all the baggage back to the rear except just enough to make out with: only allow the company officers thirty (30) lb. each and the cooking utensils are to be included in the 30 lbs. I kept one blanket and a shift of under cloathing and overcoat and that is more than I want to be pestered with if my reg't don't get better. Has been hurting me good deal lately. I don’t think I can hold on to march to the (illegible). Will go on as far as I can though. I would not be surprised if Lee goes over it all again this summer.

I haven’t herd from home since I left. Had a letter from Martin few days ago. Have written home twice. Will send a letter tomorrow by Adam. He will start home on furlough if nothing hapens. All the boys are in good health at present. Capt. C. Erson is now Major of the 52nd; makes a very good Maj. too.

Also soon as you hear anything from Triplett let me know as soon as you can. I am anxious to hear from him. No news of interest in the army at present. All the soldiers will vote for Vance again for Gov. Haven’t seen a man yet that will vote for Holden. Vance's speech killed Holden. In the army every body was pleased with his speach. (In the spring 1864 NC election Conservative Zebulon B. Vance was easily re-elected governor over Unionist Democrat / peace candidate William Woods Holden, gathering over 80 percent of the vote; Holden turned to the Republican party at the end of the Civil War and was appointed (not elected) as NC Governor by President Andrew Johnson)

I must close for this time. Excuse this letter. Write me soon.