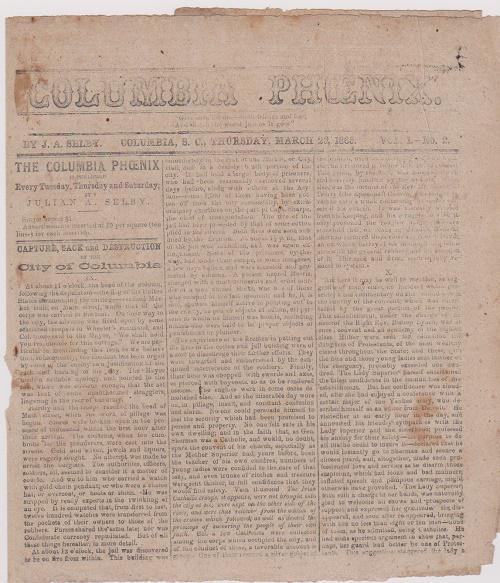 COLUMBIA PHOENIX newspaper. Vol. 1 – No. 2. An extremely rare war date paper issued by Southern writer Julian A. Selby a few weeks after Union forces captured Columbia under General Sherman. The main article, (sections IX, X, XI, XII), covers the destruction of the city of Columbia by fire in February 1865. Printed on typical late Confederate paper each of the 6 pages has three columns. The newspaper is a 3 page horizontal foldout with the title page being page 1. The 3rd column of page 4 and thus the 1st column of page 5 are missing. Overall in vg condition.

“The Columbia Phoenix (1865-78) arose out of the charred remains of Columbia, the capital city of South Carolina, in the aftermath of the Civil War to record its losses and bear witness to its gradual recovery. A triweekly newspaper, the Phoenix first appeared on Tuesday, March 21, 1865, mere weeks after fires had razed a third of the city. It struck a defiant tone, declaring, “Our city shall spring, from her ashes, and our Phoenix, we hope and trust, shall announce the glorious rising! God save the state!” For over ten years, it reflected on the hardships (crop failures, the scarcity of goods and money) and hopes (the return of businesses and railroads, voting rights for African Americans) of the residents of Columbia and neighboring communities in the Midlands region of South Carolina.

Proprietor Julian A. Selby boasted considerable experience in the newspaper business, having formerly owned the Tri-Weekly South Carolinian (also called Tri-weekly Carolinian and South Carolinian). In establishing the Columbia Phoenix, however, he literally started from scratch. In the weeks immediately following the city’s destruction, Selby scoured the state for paper, a press, and printing supplies. He and his assistants fashioned for themselves the things they could not find. He also secured the services of renowned Southern literary critic, novelist, and poet William Gilmore Simms as editor. Living conditions in the capital city were so desperate that, early on, the staff offered to accept food staples such as bacon, eggs, rice, and potatoes as payment in lieu of cash subscriptions. The first ten issues contained a detailed history of the burning of Columbia, which was separately published as Sack and Destruction of the City of Columbia, S.C., in October 1865 (itself edited and republished as A City Laid Waste in 2005). Simms departed after six months, but not before Federal troops had arrested him for criticizing their presence in Columbia. Selby edited and published the Phoenix for much of its existence, ceding editorial control only in its twilight years to Henry S. Farley, publisher of the Columbia-based triweekly paper, the Straight-out Democrat." (Credits – University of South Carolina, Columbia, SC)