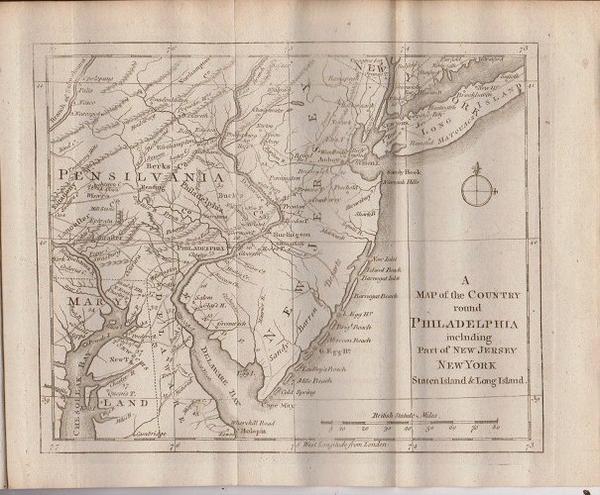 The Gentleman's Magazine: For SEPTEMBER, 1776. founded in London, England by Edward Cave in January 1731, the magazine ran until 1922. Its mission was to print news and commentary on subjects which were of interest to educated people around the English world. Printed in London for D. Henry, the September, 1776 retains a foldout map (8 1/4" x 10 1/4") titled A MAP OF THE COUNTRY ROUND PHILADELPHIA INCLUDING PART OF NEW JERSEY, NEW YORK, STATEN ISLAND AND LONG ISLAND. The map also shows the Delaware, Susquehanna and Hudson Rivers and the seat of war on the eastern side of America with a explanation of the map. Contents include Observations on the Situation of the Armies on the Eastern Side of America; Thoughts on the Late American Declaration in which the writer analyzes various lines of the Declaration of Independence, including "We hold (they say) these truths to be self-evident: That all men are created equal. In what are they created equal? is it size, strength..."; Continuation of American Affairs, etc. There is also mention of Gen. Arnold plus two reports on George Washington. Dbd, 48 pgs. full title and contents page with an engraving of St. John's Gate. Vg cond.