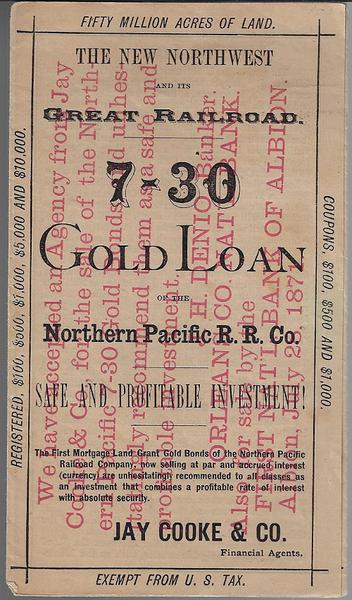 THE NEW NORTHWEST AND THE GREAT RAILROAD. 7-30 GOLD LOAN OF THE NORTHERN PACIFIC R.R.CO. SAFE AND PROFITABLE INVESTMENT. Jay Cooke and Co. 1871. 5 paged foldout, map titled MAP OF THE NORTHERN PACIFIC RAILROAD AND ITS CONNECTIONS. "The route of the A NORTHERN PACIFIC RAILROAD is as follows: Starting from Duluth, Minnesota, at the head of Lake Superior, and from St. Paul and Minneapolis on the Mississippi river, the two eastern arms unite in central Minnesota; from the point of junction the trunk line extends westward through central Dakota and central Montana. At a convenient point in Montana the road will again branch, one arm passing through central Washington to the main Ocean Terminus on Puget Sound - the other following down the valley of the Columbia through Southern Washington and Northern Oregon to Portland, at tide water on the Columbia river. A shore line - now building - will unite the two western termini.  Still another branch will leave the main line in Western Minnesota, and extend north through the Red river valley to Pembina on the border of British America. Nature has leveled a pathway for the Northern Pacific Railroad from the Lakes to the Ocean." Vg cond.