The Salem Gazette - The First Air Mail Delivery In America 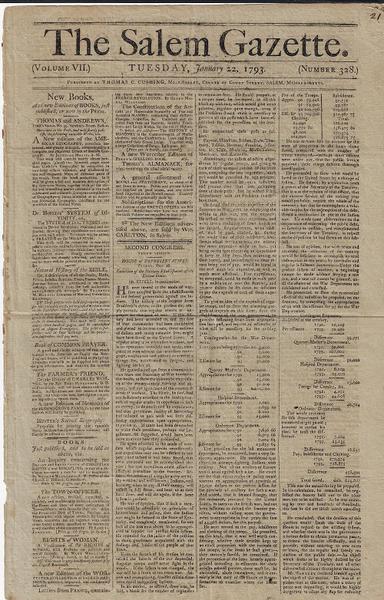 [Aeronautics – Newspaper) THE SALEM GAZETTE. Tuesday, January 22, 1793. Volume VII – Number 328. Published by Thomas C. Cushing – Salem, Massachusetts. 4 pages of 4 columns each with numerous articles concerning the SECOND CONGRESS; New books including one on the RIGHTS OF WOMEN; Foreign Intelligence, etc. Of most importance is the article concerning the ascent of Jean-Pierre Blanchard on January 10, 1793. This was the first manned balloon ascent in American which took place in Philadelphia. “The procefs of inflating the Balloon commenced about nine o’clock, Several cannon were fired from the dawn of day until the moment of elevation; a band of mufic played during the time of inflating, and when it began to rife, the majestic fight was truly interefting – the slow movement of the band, added folemnity to the fecine. Indeed the attention of the multitude was so abforbed, that it was a confiderable time ere filence was broke by the acclamations which succeeded.” Much ceremony was part of this 45 minute flight which was observed by President Washington. “About half after 6 o’clock in the evening, Mr. Blanchard returned to the city and paid his refpects to the prefident of the United States. His aerial voyage lafted 45 minutes, in which time he ran over a fpace of more than 15 miles, and then defcended a little to the eaftward of Woodbury, in the State of New-Jerfey where he took a carriage and returned to Cooper’s Ferry.”

Washington was on hand for the ascent, gave some remarks, and because Blanchard did not speak English, provided the balloonist a “passport,” which was a letter urging citizens to assist the balloonist wherever. This letter is referred to as the first air-mail delivery in America. Expected minor wear, fold tear, overall in vg cond.