"THE TERRIBLE CONDITION THESE POOR PEOPLE WERE IN WHEN I CAME HERE MADE IT NECESSARY FOR ME TO DO EVERYTHING I POSSIBLY COULD TO ALLEVIATE THEIR SUFFERING AND STARVATION....26,000 POUNDS OF BACON, 272,000 POUNDS OF BEEF, 295,000 POUNDS OF FLOUR...8500 POUNDS OF COFFEE, BUT AS I AM CREDITED BY THE PEOPLE AND PRESS OF MONTANA OF HELPING THEM OUT & AM NOW SATISFIED." 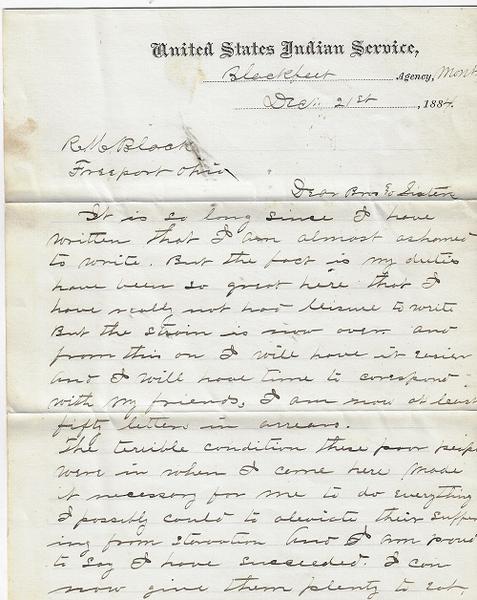 "THE TERRIBLE CONDITION THESE POOR PEOPLE WERE IN WHEN I CAME HERE MADE IT NECESSARY FOR ME TO DO EVERYTHING I POSSIBLY COULD TO ALLEVIATE THEIR SUFFERING AND STARVATION....26,000 POUNDS OF BACON, 272,000 POUNDS OF BEEF, 295,000 POUNDS OF FLOUR...8500 POUNDS OF COFFEE, BUT AS I AM CREDITED BY THE PEOPLE AND PRESS OF MONTANA OF HELPING THEM OUT & AM NOW SATISFIED." A scarce 5 page letter written by Piegan-Blackfeet Agent Reuben Allen, datelined United States Indian Service - Blackfeet Agency, Mont. - Dec. 21st, 1884. On March 16, 1884, Major Reuben Allen arrived at the Blackfoot Agency as agent following the tenure of Agent John Young, who had left due to unjust accusations stemming from the failure of the latest buffalo hunt and general lack of food supplies. Their last successful hunt had been the winter of 1879-1880. The federal government had sent Agent Young notice in September 1883 that there would be no further funds appropriated for food supplies. Within this letter, written by Major Reuben Allen, he proudly emphasizes his huge success and admiration by the Piegan-Blackfeet people and the press of Montana. At the same time it must be noted that the federal government was sending provisions so Agent Reuben's success may have partially been due to timing. United States Indian Service, Blackfeet Agency, Mont Dec. 21st, 1884 R.M. Block Freeport Ohio Dear Bro & Sister It is so long since I have written that I am almost ashamed to write. But the fact is my duties have been so great here that I have really not had leisure to write. But the strain is now over and from this on I will have it easier and I will have time to correspond with my friends, I am not at least fifty letters in arrears. The terrible condition these poor people were in when I came here made it necessary for me to do everything I possibly could to alleviate their suffering from starvation and I have succeeded. I can now give them plenty to eat. To give you an idea of what it takes to feed them I will enumerate some of the supplies of subsistence we have in the store houses at present to last until the 31st of month next: Bacon 26,237# Beans 5668# Beef cattle gros 271,912# Flour 295,277# Hard Bread 9,913# Hominy 3,794# Oatmeal 2,026# Mess Pork 1,000# Potatoes 36,000# Turnips 24,000 Rice 9,604# Syrup 143 gals.Sugar 8,304 Tea 137 # Coffee 8,691 Dried Buffalo meat 5,466# So, you can see we are not likely to starve or freeze for we have about 100 cords of wood in the stockade I issued the annuity goods to the Indians last week. They consisted of Blanket guilts shawls Hasts pants shoes mens and womens stockings shirts Handkerchiefs Scarfs Mittens Calicoes Muslin Shirtings Tickings Tin Ware Spoons knives forks. Thread, & c&c are in limited quantities.The Indians are well satisfied and I have their entire confidence. They will do anything I ask of them now But I would not pass through again what I have in the past six months for anything short of an after life inheritance not that I feared any personal danger but to witness the suffering from starvation of these poor creatures and being powerless to help them. But as I am credited by the people and press of Montana of helping them out & am now satisfied. Imagine if you will the trouble to look after the welfare of one small family Then multiply that by 500. And you will wonder I have not gone crazy. During the early part of September during a severe snow storm about 100 head of our beef cattle got away and went back to the range. So it became necessary to get them back (A Ground hog case) So I took what force I could spare from here with several Indians with camp outfit and went in search.Found them scattered for 130 miles one to five in a place among thousands of other cattle. I stayed in the saddle for 8 days. When I had to return to the agency on acct of other duties the rest of them came in four days later with 38 head. So we will have to go again as soon as as soon as the weather will permit. And during the time I was out after the cattle I never saw a human being except our own party. The day I returned I made 50 to 60 miles across the plains without any landmark for a guide and through country I had never seen before but struck the point armed for to a dot. But my horse was tired as well as myself. But enough of this we have had the most beautiful fall weather up until the first or about the 6th of this month I have ever seen. But for the past two weeks we have had real winter. In that time the mercury has never got above zero and from that to 30 degrees below for the past 24 hours it has not risen above 22 below zero, and at present it is 32 degrees below zero. But don't think we suffer with the cold for it has not frozen in the house yet our houses are very warm. The snow is 20 inches deep something I am told very unusual here. We may have a warm wind inside of 24 hours that will take it all off in a few hours. This is truly a strange country and climate. But enough of this I presume Have already wearied you Read and send to father and mother. With love to all and a hope from you soon and a promise to be more prompt in the future I am your brother Reuben P.S. Be on the lookout for something for me to make a living as in Ohio for I presume some young innocent will want this place soon and I shall not envy him R.A.A. Very readable, minor fold separations, overall in vg cond.