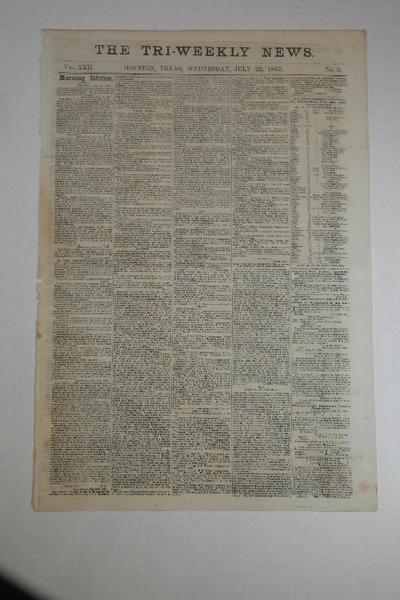 (Texas) THE TRI-WEEKLY NEWS. Houston, Texas, July 22, 1863. Morning Edition Vol. XXII - No. 9. This is a very rare Texas newspaper which began publication in Galveston but moved inland to Houston during the Civil War. According to Gregory (Union List of American Newspapers) no institution has this date in their holdings.

The front page has much reporting on the Civil War, some items a bit optimistic as it notes that, "...General Lee has had another battle. He captured Harrisburg, Penn., and 18,000 prisoners...." with talk of action near Chambersburg as well. Other items announce the Yankee blockade of the lower Texas coast and the complete isolation of Corpus Christi; The Fall of Vicksburg - Its Probable Effects Upon the People; The Yankees Again on Our Western Coast; Is Vicksburg Captured? That's The Question Still!; news from Shreveport; 124 Likely Negroes at Auction On Wednesday, July 22nd, 1863; and more. Very fine condition.