“THE UNIVERSAL REPORT IS ABOUT ONE THIRD OF ALL WHO GO TO CALIFORNIA NEVER RETURN OF THOSE WHO RETURN NOT ONE IN TWELVE ARE AS WELL OFFF AS WHEN THEY LEFT THEIR HOMES.” 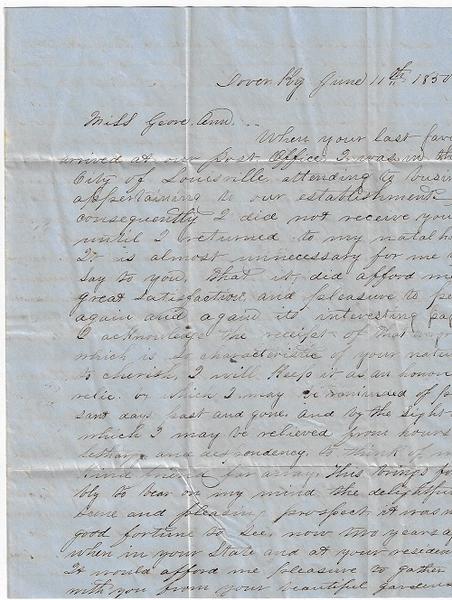 “THE UNIVERSAL REPORT IS ABOUT ONE THIRD OF ALL WHO GO TO CALIFORNIA NEVER RETURN OF THOSE WHO RETURN NOT ONE IN TWELVE ARE AS WELL OFFF AS WHEN THEY LEFT THEIR HOMES.”

Letter 1 is written to Miss G. Anna Henshaw, is 4 pages with the first page being written around a form from the Lee and Ritchie which “paid particular attention to the sale of Western Produce and all articles manufactured in the West.” Very legible, folded and addressed, small chip were pulled from wax seal, overall in vg cond. In full, without corrections, it reads:

Surrounded as I am by the usual bustle of this well known packet I attempt to reply to your last favor which was received on the day of my departure from New Orleans. If I fail to give that consideration which should characterize every communication I hope you will consider the circumstances under which it is written. Between a shaking Boat and lead pencil I doubt very much whether my scribbling will be at all legible, I have peruse many times that valued contents of your letter. And again tender you my sincere thanks for the promptness by which you meet my Letters. I am delighted to hear from you under any Circumstances. But more especially so was I when I received your last I have been out from home and traveling over two months and in that time yours has been the only Social Letter I have received. The great mass of the human family being activated by interested motives – consequently all my communications have been on business. I regret that you find cause to take exception to any part of my last, and can assure you that in the use of the term warranted or any other in my communications to you, if they are read in the same spirit in which they are written there will be no cause for accusation on either part. But to do justice to the Yankee boys, as we have got to writing about them, I would not wonder at any one who should become a victim to some of their many charms, And why not, Miss George Anna, as it is by association that our tastes are formed. I remarked in a former communication that I would not be astonished to hear that you and one of those Yankee Boys would ______ Stranger things than that have occurred. It would have afforded me great pleasure indeed to have visited you when I was in your State. But the old adage I think is good business first – and pleasure afterwards, and perhaps too I would have received but a small share of your Society. And then too their would have been bad feelings between myself and your Beaux. I presume I have already trespassed on your patience by writing so much in this strain. And now for compliance with Matilda's request in reference to California matters. I have met with many both strangers and acquaintances direct from the mines, from whom I have gathered information in detail. So as to be enabled to give information concerning the most trivial casualty in a journey to California. To sum up all that I have heard and all that I know of the country and climate I would advise every friend or acquaintance who can procure the necessaries of life in this county – to keep away from California. There are at this time more persons on the Isthmus of Panama than can be transported to the mines in the next three months. Great sickness and actual starvation is of daily occurrence. It is impossible to get a through Ticket in N Orleans at any price for months to come, there are Steam Ships leaving New Orleans nearly every week for Chagres. The Alabama was in port when I left and would leave in a few days. After her the Falcon, and Georgia then the Crescent City, all of which will sale for Chagres direct – before 10th March prices in the Cabin for passage $75. Steerage $35. portage from Chagres across the Isthmus to panama from $10 to $25. from panama to SanFrancisco Steam Vessels Cabin passage from $150 to $300. Steerage from $100 to $200. Sailing vessels carry over for one third of those rates. But they are often as long as six months from panama to Sanfrancisco – they have an almost constant North East Wind, I have seen hundreds of men from the mines. The universal report is about one third of all who go to California never return of those who return not one in Twelve are as well off as when they left their homes. If I have written any thing of interest or service to you I amply rewarded.

George Anna write me soon, and believe me as ever and truly uyour friend and admirer

You must pardon me for the use of this pencil and the Circular of my friends Lee & Ritchie, is is nearer a blank sheet than any I have – the shaking of the Boat makes it almost impossible to make a letter. For the want of Post-Office on this Packet, I cannot pay postage Steam 10 (Red Stamp)

(Folded and addressed to:)

The steam packet Peytona was a 548 ton, 266” x 34” x 8” side-wheel wooden hull packet. It was launched in 1846 from Louisville, Kentucky and destroyed (dismantled) in 1852. The Captain was Jon Shallcross who covered the waters between Louisville-New Orleans.

Henry Worthington, was a resident of Scioto County where he operated the Buena Vista free-stone quarries for about ten years employing about 600 men. From there he moved to Covington, Kentucky where his business was that of dealing in leaf tobacco. In 1876 he bought a two-thirds interest in the Licking Rolling Mills of Covington and became its president. In 1882-83 the Licking Rolling Mills Company built the Maumee Rolling Mills in Toledo, Ohio.

Letter 2 is 4 pages, very legible, folded and addressed, small chip from where pulled from wax seal, overall in vg cond. In full, without corrections, it reads:

When your last favor arrived at our Post Office I was in the City of Louisville attending to business appertaining to our establishment – consequently I did not receive yours until I returned to my natal home. It is almost unnecessary for me to say to you, that it did afford me great satisfaction and pleasure to peruse again and again its interesting pages. I acknowledge the receipt of that evergreen which is so characteristic of your nature to cherish. I will keep it as an honored relic by which I may be reminded of pleasant days past and gone. And by the sight of which I may be relieved from hours of lethargy and despondency to think of my kind friend far away. This brings forcibly to bear on my mind the delightful scene and pleasing prospects it was my good fortune to see, now two years ago when in your State and at your residence. It would afford me pleasure to gather with you from your beautiful gardens and extensive prairie fields a Bouquet that would rival in beauty, fragrance, species and variety of color those from our highest cultivated gardens in Kentucky. The month of June is to me one of the dearest of the year. Long will I remember the pleasant walks in your garden with you two years ago, and Mr. Stewart. What vicissitudes and changes have we passed through since then. It would take many pages to recount the great national vicissitudes But individually in our small party of three changes have occurred. Stewart is reveling in the mines of Californian collecting gold dust. Worthington has commenced business in the State of Ohio. George Anna I presume has grown from a little prairie Bird to a full grown Lady.

I presume ere this, Mr. Ellis and Matilda are on the plains on route to California – my best wishers are with them for their good health first, and plenty of gold afterwards. I think from all the information I can get, the health of California is better and the quantity of gold dug up will be vastly larger than on the preceding years, while the emigration from every part of the world, will be tenfold that of any preceding year – indeed the entire population of the country will be doubled.

I was sorry to hear that your Father was sick, but if a little sickness could be the instrument of deterring him from hazarding his health and life amidst the wilds of that wild country, I think it is all for the better. You and your mother I presume according to last intentions are now keeping house. If you are may you be as cheerful as happy and contented as when in the old domicile. You have learned to be quite a Yankee, for when I ask a question about the Yankee Boys, you answer it by asking another, how are the Kentucky girls. Well I must tell you that I meet with many of them and have spoken of you to them, nearly all of whom join me in my admiration of your superior excellence, But I cannot say that I regard any of them as I do G. Anna, and now I hope you will be frank enough to give me yours of the Yankee Boys. I would like to be in your State this Summer but the nature of my business I know almost beyond doubt will compel me to forgo this pleasure. I often think of you and may I never do otherwise is the sincere wish of your friend and admirer

This season in our State is unusually dry we have had no rain for four weeks. The poorest prospect for crops of every description I have seen for many years. You will I presume write as soon as you get this at all events I hope you will, for nothing offers me more pleasure than to receive a Letter from you.