To The Citizens of Cambridge 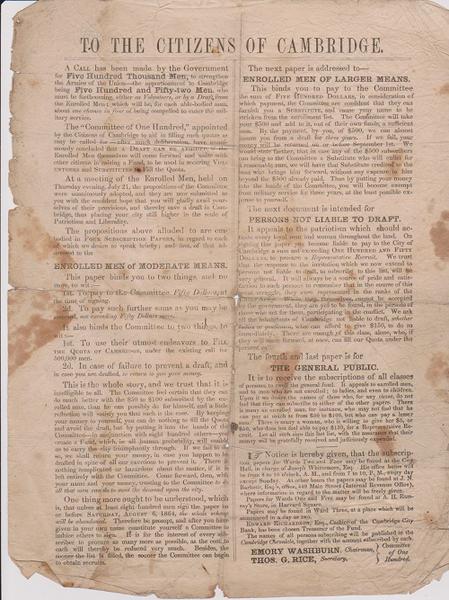 TO THE CITIZENS OF CAMBRIDGE. A Call has been made by the Government for Five Hundred Thousand Men, to strengthen the Armies of the Union – the apportionment to Cambridge being Five Hundred and Fifty-two Men, who must be forthcoming, either as Volunteers, or by a Draft, from the Enrolled men; which will be, for each able-bodied man, about one chance in four of being compelled to enter the military service. A one page broadside printed by the Cambridge, Mass. Committee of One Hundred and signed in print by Emory Washburn, Chairman and Thos. G. Rice, Secretary. 1863. 7 ¼ x 8 ½ inches (28 ½ x 21 ½ cm)

An interesting anti-draft broadside, issued by the Committee of One Hundred in Cambridge, MA. During the civil war the town of Cambridge lost 350 men of whom 35 were officers. A section of this broadside is titled ENROLLED MEN OF MODERATE MEANS and it states that “This paper binds you to two things and no more, to wit 1st. To pay to the Committee Fifty Dollars at the time of signing. 2d To pay such further sums as you may be assessed, not exceeding Fifty Dollars more. It also binds the Committee to two things to wit – 1st. To use their utmost endeavors to FILL THE QUOTA OF CAMBRIDGE, under the existing call for 500,000 men. 2d. In case of failure to prevent a draft, and in case you are drafted, to return to you your money.”

“This is the whole story, and we trust that it is intelligible to all. The Committee feel certain that they can do much better with the $50 to $100 subscribed by the enrolled man, than he can possibly do for himself, and a little reflection will satisfy you that such is the case. By keeping your money to yourself, you can do nothing to fill the Quota and avoid the draft, but by putting it into the hands of the Committee – in conjunction with eight hundred others – you create a Fund, which, in all human probability will enable us to carry the city triumphantly through. If we fail to do so, we shall return your money, in case you happen to be drafted in spite of all our exertions to prevent it. There is nothing complicated or hazardous about the matter, if it is left entirely with the Committee. Come forward, then, with your name and your money, trusting to the Committee to do all that men can do to meet the demand upon the city.”