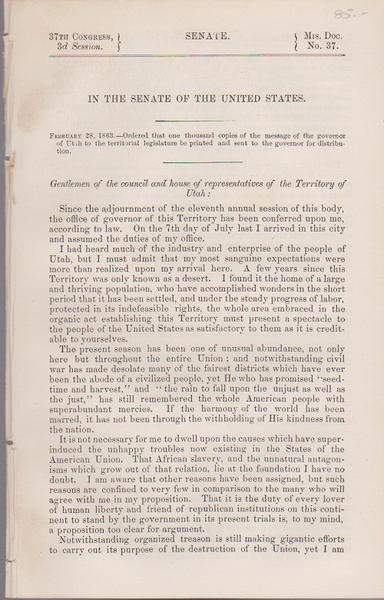 IN THE SENATE OF THE UNITED STATES. February 28, 1863. Ordered that one thousand copies of the message of the governor of Uah to the territorial legislature be printed and sent to the governor for distribution. Gentlemen of the council and house of representatives of the Territory of Utah. 37th Congress, 3d Session. SENATE. Mis. Doc. No. 37. 16 pgs. Contents include information concerning Proclamation of Emancipation; Admission of the State of Deseret into the Union; Polygamy; Act of Congress Against Polygamy; Liberty of Conscience; Indian Troubles; Homestead Act, etc. 16 pgs. Dbd. Vg cond.