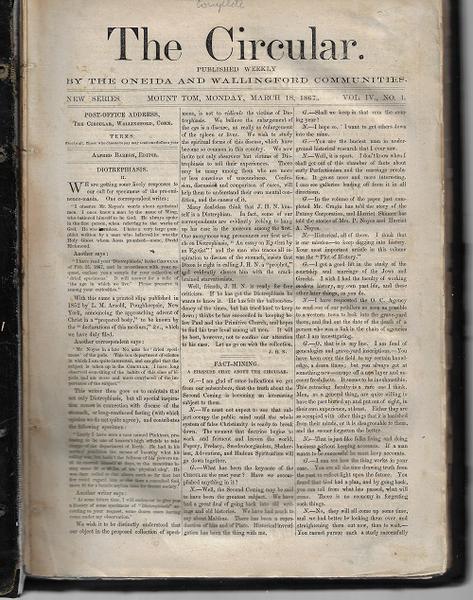 The Oneida Communities were found by John Humphrey Noyes (1811-1886) and practiced complex marriages, even credited with the coining of the phrase “free love”. As the society evolved they began a eugenic breeding program, the practice of improving the human species through selective mating of people with preferred hereditary traits in an effort to breed out various diseases and undesirable characteristics.

Although the newspaper covers a multitude of subjects including international and local news, there is also a great deal of emphasis on Oneida doctrine. Examples found within the paper would be analyzing the difference between Mormons, Shakers, Spiritualists, The Charge of Marrying for Money, The Anti-Mormon Movement – A Great Effort, articles concerning anti-slavery, abolitionists, Negro hymns, the Spirit of Freedman, the curing of insanity, analyzing the fact that Mormon wives are not jealous and the surrendering of Jefferson Davis.

In an article written by William Henry Channing, titled MORAL REFORM he writes “The first cause of licentiousness is to be found in a vicious organization, derived from parents with low appetites and of defective intellect and affection. This subject can be touched upon. But James P. Graves told the simple truth when he said to a lady with more good sense certainly, than good taste, ‘Madam, reform must begin in the marriage bed.”

Horace Greely in his article titled THE ANARCHY OF LABOR wrote “...Four times as many persons as are really needed are engaged in three times the needful cost in supplying families with Milk, Fruits, Vegetables, Groceries…. The sum of their subsistence and profits is of course an indirect tax on Productive labour….”

Spiritualism played an important part in the Oneida community. In one article it was written “...We know that material things convey spirits. The Spiritualists are strong on this point. They hold that a letter or a lock of hair carries with it the spirit of the person it came from, so that a seer or a clairvoyant can by it discern and describe the character. We hold that the Circular carries with it the spirit of the Oneida Community; so that any person reading it is affected, not merely by the ideas it presents but by the living aura of the body from which it emanates; and this influence is to a certain extent, independent of the character of particular articles...”

The article titled FREE LOVE states “...The obvious and essential difference between marriage and whoredom may be state thus: Marriage is a permanent union. Whoredom is a temporary flirtation...Free love to us does not mean freedom to love to-day and leave tomorrow; or freedom to take a woman’s person and keep our property to ourselves; or freedom to freight a woman with offspring and send her downstream without care of help; or freedom to beget children and leave them to the street and the poor-house. Our communities are families, as distinctly bounded and separated from promiscuous society as ordinary households….We are not “free lovers’ in any sense that makes love less binding or responsible than it is in marriage.”