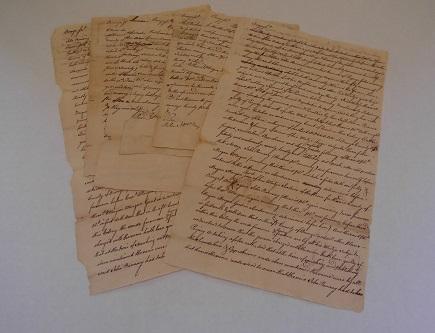 Rare documents from one of Virginia’s founding fathers - Pendleton, Edmund. (1721–1803)

Seven autographed legal documents concerning various claims while Edmund Pendleton was practicing in Orange County, Virginia. Orange County, named in honor of William, Prince of Orange, was formed from the westernmost portion of Spotsylvania County in 1734. Its first court was held in January of 1734.

The Virginian patriot Edmund Pendleton, was apprenticed at the age of fourteen to a clerk of Caroline County’s court. As a diligent student in the area of law he was admitted to the bar in April of 1741. The documents offered are dated July 22, 1741 through June 24, 1742 and in the Court of Orange County. It is interesting to note that Pendleton’s biographers, Robert Hilldrup and David Mays describe his early practice in the counties of Caroline, Stafford, Spotsylvania and Essex but his being a lawyer in Orange County is not mentioned. These seven documents are written and signed by Pendleton on behalf of clients “who could not pay fees or who wanted to collect some, small, tough accounts which the successful lawyers did not find worth their while”. (Mays, p. 26)

As to the patriotic live of Edmund Pendleton he served as a representative to the First Continental Congress, was President of both of Virginia’s revolutionary conventions in 1775 and was also president of the powerful Committee of Safety for the state. His sustaining an injury from falling from his horse kept him from being in the Second Congress and a Signer of the Declaration of Independence. He was elected president of the Virginia convention again in 1776 and under his direction, Virginia’s delegates to the Continental Congress put forth a motion for independence from Britain. Following Independence, he helped revise Virginia’s own Constitution, and worked on behalf of the judicial system, serving as a chief justice in Virginia’s courts. Finally, he presided as President of Virginia’s Ratifying Convention for the Constitution in 1788.

Edmund Pendleton material is extremely rare and especially so from this period of his career as a lawyer.

1. (1742) (Spelling uncorrected) “Patrick Leonard complains of John Hawkins in Custody.....at Orange County with force and Arms that is to say with swords, staves and knives on him. The said Plt an afsault did make and him then and there did beat, wound and evily Intreat so that his life was greatly despaired of and other ____To him then and there offered against the Peace and so forth and to the damage of these Plt twenty pounds Current money and these of he brings suit....”

E. Pendleton, for the plt.

Further investigation found that Patrick Leonard, of Orange County, VA seems to be somewhat of “a brawler and fighter”. He appears in court records throughout the 1740’s and 1750’s. This altercation was followed by another in 1743 in which Patrick Leonard is ordered to the stocks “for calling the sheriff a liar....”

2. (1742) (Spelling uncorrected) “Neil Buchannon of London Merchant complains of Jacob Funk....was Indebted to the said plt. in seven pounds, six shilling and two pence Current money for diverse goods, Wares & Merchandizes by the said plt to the said defendant at his Special Instance and request before that time Sold and delivered and being so Indebted he the said deft in Consideration thereof afterwards to wit the day and year aforesaid at the County aforesaid afsumed upon himself and to the said plt then & there faithfully Promised that he the said deft the afd sum of seven pounds, six shillings & two pence ____ plt would well and truly Content and pay when ever he should afterward be thereunto required ....... We of Jury find for the plantif Seven pounds __ shillings & two pence Curnt money.....”

E. Pendleton for the plt.

Further investigation into the land grants of Orange County finds that on “15-16 Feb. 1734. Jacob Funk of Orange County to John Funk of Lancaster County, Province of Pennsylvania. Lease and release; for current money. 180 acres on the northwest side of the north branch of Sharendo River near a place called Stony Lick, part of 2030 acres granted unto Henry Willis of Orange County, Gent., 20 Aug. 1734 and by henry Willis sold unto the said Jacob Funk...at a great stone commonly knowne by the name of the mill stone on the north west side the North River on the bank of the same...crossing Tumblin Run...down a steep bank to the beginning stone. Jacob Funk. Wit. John Smith, John Hite”

3. (1741) (Spelling uncorrected) William Hunter complains of Andrew Harrison in Custody & c of a plea that he render to him twenty four pounds, seventeen shilling and eight pence Current money which to him he owes ....for the third day of October in the year of our Lord One Thousand Seven hundred and forty one ....”

E. Pendleton for the Plt.

4. (1741) (Spelling uncorrected) William Lawison, Robert Taliaferro and John Sanders complain of Thomas Rucker otherwise called J Thomas Rucker of the county of Caroline in Custody and so forth of a plea that he render to them One hundred pounds Curr’t money of Virginia which to them he owes & unjustly detain and c. for that ____ the said Thomas on the fourteenth day of Sept in the year of our Lord One thousand seven hundred and thirty nine at the parish of St. Thomas on the County afores’d by his certain writing obligatory sealed with the seal of the def’t and to the Court now here shewn whose date is the day and year afores’d did acknowledge himself to be held and firmly bound to the afores’d plt in the Aforesaid One hundred pounds in Curn’t money of Virginia to be paid when required. ____ def’t althou often required and c. One hundred pounds to the plt or any part thereof to either of them hath not pd but the same to pay had denyed ____ doth deny to the Damage of the Plts five pounds Curr’t money and thereof he brings suit and so forth.”

Edm Pendleton for the Plt

6. (1742) (Spelling uncorrected) “John Ramsey complains of Hugh Fox.....that the person charged with the same hath been guilty of Perjury or taking a false oath, and at the time of speaking and publishing the Scandalous and Opprobrious words above mentioned the same were by all that heard the same understood to mean that the said John Ramsey had taken a false oath and been guilty of Perjury before the said Morgan Morgan Gent. By means of speaking and Publishing which Said false, scandalous and defamatory words he said pl’t is not only greatly Injured and Prejudiced in his good name, reputation and Character, but hath also been obliged to undergo a great deal of bodily Labor and Anxiety of mind and hath been put to great expense to falsifie the said Scandelous Asperscions and to manifest his Innocence in the Promises to the damage of the said pl’t five hundred pounds Sterling, An thereof he brings suit....”

E. Pendleton for the Pl’t.

Quite possibly the Morgan Morgan (b. Wales 11-1-1688 d. Bunker Hill, Berkeley, VA 11-17-1766) referred to here was a significant leader in the affairs of Orange County. He was the 1st civil officer, the 1st judicial officer, the 1st commissioned military officer, the 1st road engineer, the 1st licensed tavern keeper and the official sponsor of the 1st church, built as Morgan’s Chapel witin the boundaries of the state. Presently it is Christ’s Episcapal Church.

7. (1742) (Spelling uncorrected) John Ramsey complains of Patrick Matthews in Custody and so forth for that whom The said Plt is and from the time of his nativity hath been a good, true, honest and faithful subject of our Lord the King that now is and his predecefors Kings and Queens of England and as such a good, true, honest and faithful Subject hath always hitherto behaved and demeaned himself altogether free and clear of the obvious and wicked Crimes of Perjury, false swearing or any other such Like enormous Crimes or any suspicion Thereof, by means of which he hath deservedly obtained the favors, Love, good Will and Affection of all his neighbors.... John Ramsey....did forswear himself before Morgan Morgan....did take a false oath willfully and material to the difference in a ____ determined before Morgan Morgan Gent..... and again John Ramsey .....was forsworn before Capt. Morgan.... And that at the time of speaking and publishing the vandalous and Opprobrious words above mentioned the same were by all that heard them understood to mean That The said John Ramsey had taken a false oath and been guilty of Perjury before ____ Morgan Morgan Gent by means of speaking and publishing which said false vandalous and defamatory words he thus said John is not only greatly Injured and Prejudices in his good name, reputation and Character, but hath also been Obliged to undergo a great deal of bodily Laboar and anxiety of mind and hath been put to great Expense to falsifie these Scandalous Aspersions and to manifest his Innocence in the Premises to the Damage of the said John five hundred pounds Sterling And thereof he brings suit....”

E. Penderton for the Plt