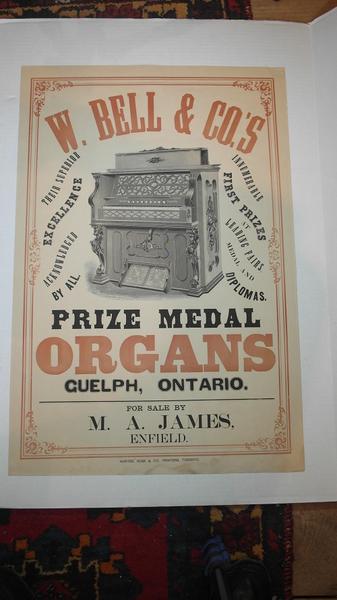 Established in Guelph, Canada West (Ontario) "by the brothers William and Robert Bell with a staff of three, it produced 25 four legged 'Diploma" melodeons in its first year. William Bell assumed management in 1865 and, as W. Bell and Co., opened a factory on Market Square in 1871. By 1881 nearly 200 employees produced annually over 1200 melodeons and read organs, some of which were exported as far as Australia. By 1884 (by which time the company claimed to have produced 26,000 instruments) Bell formed a partnership with his son W.J. Bell (1863-1925), Mrs. W.B. Kennedy and A.W. Alexander. The younger Bell sold the firm to an English syndicate in 1888, wt which time the name was changed to the Bell Organ and Piano Co, Ltd, and the manufacture of pianos was begun." (Internet reference)