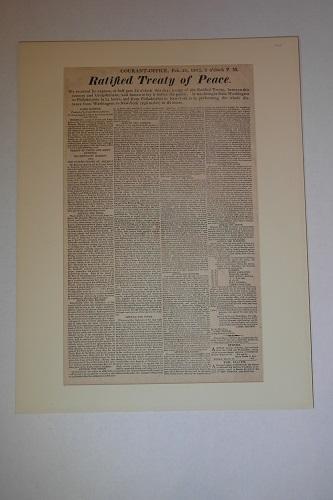 JAMES MADISON, President of the United States of America. To all and singular to whom these presents shall come, Greeting:

“Whereas, a treaty of Peace and Amity between the United States of America, and his Britannic Majesty was signed at Ghent, on the twenty-fourth day of December, one thousand eight hundred and fourteen, by Plenipotentiaries respectively appointed for that purpose; and the said treaty having been, by and with the advice and consent of the Senate of the United States, duly accepted, ratified, and confirmed, on the seventeenth day of February; one thousand eight hundred and fifteen; and ratified copies thereof having been exchanged agreeably to the tenor of the said treaty, which is in the words following, to wit:”

TREATY OF PEACE AND AMITY BETWEEN HIS BRITANNIC MAJESTY AND THE UNITED STATES OF AMERICA.

“There shall be a firm and universal Peace between His Britannic Majesty and the United States, and between their respective countries, territories, cities, towns and people, of every degree, without exception of places or persons. All hostilities, both by sea and land, shall cease as soon as this Treaty shall have been ratified by both parties.... All territory, places, and possessions whatsoever, taken from either party by the other, during the war, or which may be taken after the signing of this Treaty, excepting only the islands hereinafter mentioned, shall be restored without delay, and without causing any destruction, or carrying away any of the artillery or other public property originally captured in the said forts or places....or any slave or other private property....”

“....it is reciprocally agreed, that all vessels and effects which may be taken after the space of twelve days from the said ratifications, upon all parts of the coast of North America, from the latitude of twenty-three degrees north, to the latitude of fifty degrees north, and as far eastward in the Atlantic ocean, as the thirty-sixth degree of west longitude from the meridian of Greenwich, shall be restored on each side....”

“All prisoners of war taken on either side, as well by land as by sea, shall be restored as soon as practicable after the ratifications of this treaty, as herein after mentioned, on their paying the debts which they may have contracted during their captivity....”

“The said Commissioners shall by a declaration or report under their hands and seals, decide to which of the two contracting parties the several islands aforesaid to respectively belong, in conformity with the true intent of the said Treaty of Peace of one thousand seven hundred and eighty-three. And if the said Commissioners shall agree in their decision both parties shall consider such decision as final and conclusive...”

“The said Commissioners shall have power to ascertain and determine the points abovementioned, in conformity with the provisions of the said treaty of peace of one thousand seven hundred and eighty three, and shall cease the boundary aforesaid, from the source of the river St. Croix to the river Iroquoisor Cataraguy, to be surveyed and marked according to the said provisions. The said Commissioners shall make a map of the said boundary, and annex to it a declaration under their hands and seals, certifying it to be the true map of the said boundary, and particularizing the latitude and longitude of the northwest angle of Nova Scotia, of the nortwesternmost head of Connecticut river, and of such other points of the said boundary as they may deem proper. And both parties agree to consider such map and declaration as finally and conclusively fixing the said boundary.”

“The said Commissioners shall, by a report or declaration, under their hands and seals, designate the boundary through the said river, lakes, and water communications, and decide to which of the two contracting parties the several islands lying within the said river, lakes, and water communications do respectively belong, in conformity with the true intent of the said treaty of one thousand seven hundred and eighty-three. And both parties agree to consider such designation and decision as final and conclusive....”

“It is further agreed that the said two last mentioned commissioners, after they shall have executed the duties assigned to them in the preceding article, shall be, and they are hereby authorized upon their oaths impartially to fix and determine, according to the true intent of the said Treaty of Peace, of one thousand seven hundred and eighty-three, that part of the boundary between the dominions of the two powers, which extends from the water communication between lake Huron, lake Superior, to the most north-western point of the Lake of the Woods, to decide to which of the two parties the several islands lying in the lakes, water-communications, and rivers, forming the said boundary; do respectively belong, in conformity with the true intent of the said Treaty of Peace, on one thousand seven hundred and eighty three; and to cause such parts of the said boundary, as require it, to be surveyed and marked.”

“The several boards of two Commissioners mentioned in the four preceding articles, shall respectively have power to appoint a Secretary, and to employ such surveyors or other persons as they shall judge necessary.... It is further agreed between the two contracting parties, that in case any of the islands mentioned in any of the preceding articles, which were in the possession of the parties prior to the commencement of the present war between the two countries, should, by the decision of any of the boards of Commissioners aforesaid, or of the sovereign or state so referred to, as in the four next preceding articles contained, fall within the dominions of the other party, all grants of land made previsions to the commencement of the war by the party having had such possession, shall be as valid as if such island or islands, had by such decision or decisions been adjudged to be within the dominions of the party having such possession.”

“The United States of American engage to put an end immediately after the ratification of the present Treaty to hostilities with all the tribes or nations of Indians, with whom they may be at war at the time of such ratification; and forthwith to restore to such tribes or nations, respectively, all the possessions, rights and privileges, which they may have enjoyed or been entitled to in one thousand eight hundred and eleven, previous to such hostilities...

“Whereas the traffic in slaves is irreconcilable with the principles of humanity and justice, and whereas both his majesty and the United States are desirous of continuing their efforts to promote its entire abolition, it is hereby agreed that both the contracting parties shall use their best endeavors to accomplish so desirable an object.”

“This Treaty, when the same shall have been ratified on both sides, without alteration by either of the contracting parties, and the ratifications mutually exchanged, shall be binding on both parties....”

A broadsheet from the Courant (probably the Hartford Courant) in vg cond. 10 ½” x 17 ½” Professionally matted with border.

The immediate causes of the War of 1812 were a series of economic sanctions taken by the British and French against the US as part of the Napoleonic Wars and American outrage at the British practice of impressment, especially after the Chesapeake incident of 1807. In response to the 1806 British Orders in Council, which crippled American trade, the US (under Jefferson) first tried various retaliatory embargoes. These embargoes hurt the US far more than they did Britain, angering American citizens and providing support to War Hawks in Congress like Henry Clay. In 1812, with President Madison in office, Congress declared war against the British. The war began with an attack on Canada, both as an effort to gain land and to cut off British supply lines to Tecumseh's Indian confederation, which had long troubled the US. The initial battles in Canada were not as easy as the War Hawks hoped, and the inexperienced American soldiers were pushed back rapidly. In fact, only by virtue of clutch naval victories by Oliver Hazard Perry on Lake Erie and Thomas Macdonough on Lake Champlain was a serious northern- front invasion of the United States, including New York, prevented. General William Henry Harrison's forces did manage to kill Tecumseh at the Battle of the Thames in 1813, in the midst of a decisive victory against the British General Isaac Brock's smaller force. On the Mid-Atlantic Coast, British troops landed in the Chesapeake Bay area in 1814, and marched towards Washington. US General William Winder made an attempt to stop the British forces, commanded by General Robert Ross, at Bladensburg. The US troops were badly routed. The city of Washington was evacuated, and the British burned the Capitol and the White House, along with most of nonresidential Washington. The British pressed onward, and Admiral Cochrane sought to invade Baltimore. General Ross was killed as his forces advanced towards the city, and their movement stalled. Cochrane's forces bombarded Fort McHenry, which guarded Baltimore's harbor, but were unable to take it. This event inspired Francis Scott Key, an American lawyer detained on one of Cochrane's ships, to write the Star-Spangled Banner. Unsuccessful at Baltimore, Cochrane's damaged fleet limped to Jamaica for repairs, and made preparations for an invasion of New Orleans, hoping to cut off American use of the Mississippi River. By mid 1814, the War of 1812 was turning out to be tougher fighting than either side expected. Britain, caught up in the costly Napoleonic Wars, began to look for a way to extricate itself from its American commitment. In the Belgian city of Ghent, American negotiators (including John Quincy Adams and Henry Clay) met with British diplomats. After considerable bickering, the negotiators signed the Treaty of Ghent on December 24, 1814, officially ending the war. The treaty returned US-Britain relations to the same status as they had been before the war. The US neither gained nor lost any territory. Impressment went unaddressed. The war was officially over, but news traveled slowly across the Atlantic Ocean. In New Orleans, Cochrane landed the British troops, who were still waiting for their replacement commander for Ross, General Packenham, to arrive from Britain. On January 8, 1815, Andrew Jackson's ragtag army soundly defeated the British at the Battle of New Orleans. Even though this battle had been fought unnecessarily (the treaty was already signed) the US celebrated wildly, manifesting an upsurge in American nationalism. Although the war had sheltered New England manufacturing from British competition, New England merchant shipping had been seriously hurt, and a group of Federalists met at the Hartford Convention in late 1814 to discuss their grievances. A few talked of secession from the Union, but most just wanted to make it hard for the US to declare war or impose embargoes in the future. When the news of the treaty from Ghent arrived, it made the Federalists look silly, or even treasonous. The Hartford Convention spelled the end of the Federalist Party. (Taken from Sparknotes.)