An interesting letter on the political issues of 1836 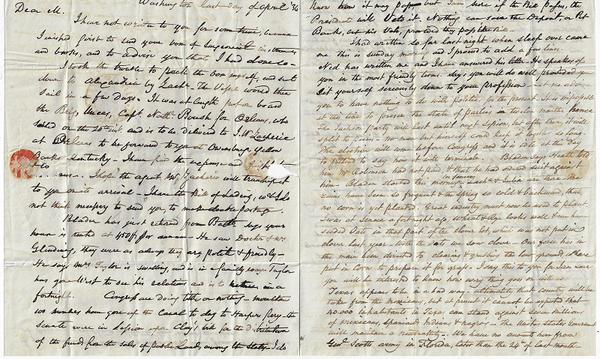 A really interesting4 page letter from Joseph Forrest to his son who is identified as simply Dear M. Its contents cover various areas of interest including sound fatherly advice about sticking to your profession as a surgeon, political news concerning the Republic of Texas, Florida Seminole War, Andrew Jackson, the sale of slaves, the upcoming presidential election, Congress, etc. Very readable. Self contained, the letter was written to Doct. M. Forrest, Owensboro, Yellow Banks, Daviess Cty. Kentucky and stamped from City of Washington. Small chip where wax seal was attached.

I have not written to you for some time, because I wished first to send your box of surgeonical instruments and books, and to advise you that I had done so.

I took the trouble to pack the box myself, and sent down to Alexandria by Zach’a. – The Vessel would then sail in a few days. It was at length put on board the Brig. Uncas, Capt. Nath’l Roush for Orleans, who sailed on the 20th inst. and is to be delivered to J. W. Zacherie at Orleans to be forward to you at Owensburg, Yellow Banks, Kentucky - I have paid the expense and freight to Orleans. I hope the agent Mr. Zacherie will transfer it to you on its arrival - I have the Bill of Lading, which I do not think necessary to send you, to make double postage.

Bladen has just entered from Balto. Says your house is rented at 450$ per annum. He saw Doctor J. W. Glendening, they were as always they are polite & friendly - He says Mrs. Taylor is swelling, and is in a family way. Taylor has gone West to see his relations and is to return in a fortnight. Congress are doing (?) or nothing - more than 100 members have gone up the Canal to day to Harpers Ferry - the Senate were in Session upon Clay’s bribe for the distribution of the funds from the sales of public lands among the States - I do know how it may pass, but I am sure if the Bill passes, the President will Veto it. Nothing can save the Deposit, or (?) Banks, but his Veto, provided they pass the bill.

I had written so far last night when sleep over came me. This is Sunday morning and I proceed to add a few lines. Ned has written me and I have answered his letter. He speaks of you in the most friendly terms. Says you will do well provided you get yourself seriously down to your profession - Let me advise you to have nothing to do with politics for the present - It is impossible at this time to foresee the state of parties twelve months hence. The Jackson party will last until next session, but after then, it will split to pieces - no man but himself could keep it together so long. The election will come before Congress and it is idle at this day to pretend to say how it will terminate. Bladen says Heath told him Mr. Robinson had not paid, & that he had ordered suit against him. Bladen started this morning for Seneca - Zach'a & Julia are there - The rains have been so frequent & the spring so cold & backward, that no corn is yet planted. Great industry must now be used to plant. I was at Seneca a fortnight ago, wheat & rye looks well & we have seeded oats in that part of the clover lot, which was not put in clover last year - with the oats we saw clover - Our force has been in the main directed to clearing & grubbing the low ground. I have put in corn to prepare it for grass. I say this to you for I am sure you will be interested to know how every thing goes on with us.

Texas appears to be in a bad way. Ultimately that country will be taken from the Mexicans, but at present it cannot be expected that 40,000 inhabitants in Texas can stand against seven million of Mexicans, Spaniards, Indians, & Negroes - The United States Government will maintain a neutrality - We have no accounts here from Gen. Scott’s army in Florida, later than the 24th of last month. The Indians will not meet Scott’s army, nor will he be able to find them – The sickly season is approaching, and the difficulty in procuring ? so great that our troops will have to be withdrawn from their present position, and open another campaign next November - if so, we may expect the whole body of Indians will commence a war upon our frontier and drive in our settlers in the West. Congress have already appropriated two million for the Florida War, how much it may cost before it ends the wisest cannot conjecture. - Let me hear from you. Give my affectionate regards to Mary. Josephine joins hers. French, Emily, & Cary are at Simss & well. Pots & Amelia as you last saw them, kind looks but no words - Boarman is at sea. Zach'a Johnston & Dan Dulany are ordered to the Frigate U. S. Ramsay in status quo. Jim & Ham carry on as usual, rather worse. They sent their working negroes, men, women & children to Georgetown to sell to a Southern trader. They were attached here by Major Peter, taken and sold to Mr. Grundy of the Senate (from Tennessee) for about 3.500$ - now they have no hands to work their land. William Delany is attached to the barracks in Washington & stays with William & Mary Winn – Mrs. Winn is at the hospital in Connecticut with but little expectation of recovery - I do not believe Congress will adjourn before the 1st of July - nothing is done without party views - The Presidential election influences every consideration. Say to Mary that her mother received a letter from her while Bladen was in Baltimore, and was much pleased at its contents. Love to her & remain your affectionate Father. Joseph Forrest

For the 1st time for 40 years I begin a letter on the wrong side of the page - my pen & ink are so bad you will hardly be able to read it.

If you should not hear in a reasonable time from Mr. Zacharie at Orleans you should write to him about your box.