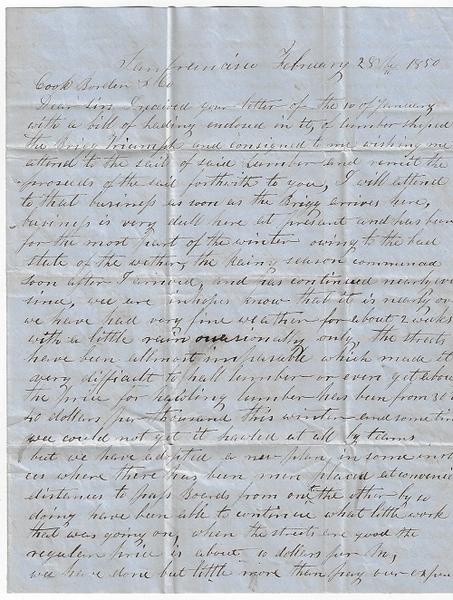 Cook Borden and Co. founded by Cook Borden (1810-1880) was a lumber company with its home base in Fall River, Massachusetts. The letter writer was was probably a relative. The Cook Borden and Co. was founded in Fall River, MA in the 1840's and supplied the major mills and transportation companies in the region. Cook Borden was also "president of the Union National Bank and a member of the Board of Investment of the Union Savings Bank and a Director in the Chace, Richard Borden and Tecumseh mills." (Fenner, H.M. History of Fall River) Three pages, very legible, stamped and docketed with a San Francisco postage stamp. There are a couple of very minor fold splits, and a small hole, but all the words are readable. A very informative letter in vg cond.  The letter with all of its spelling errors in full reads: San Francisco – February 28th 1850

Dear Sir, I received your letter of the 10 of January with a bill of lading enclosed in it, of lumber shipped on the Brigg Triumph and consignment to me wishing me to attend to the ____ of ____ Lumber and remit the proceeds of the said forthwith to you, I will attend to that businefs as soon as the Brigg arrives here, businefs is very dull here at present and has been for the most part of the winter owing to the bad state of the wether, the rainy season commenced Soon after I arrived, and has continued nearly ever since, we are in hopes know that it is nearly over we have had very fine weather for about 2 weeks with a little rain occasionally only, the streets have been allmost impassable which made it very difficult to haull lumber or even get about, the price for hauling lumber has been from 30 to 40 dollars per thousand this winter and sometimes we could not get it hauled at all by teams but we have adopted a new plan in some instances where there has been men placed at convenient distance to pass boards from one to the other, by so doing have been able to continue what little work was going on. When the streets are good the regular price is about 10 dollars per m. We have done but little more than pay our expenses here this winter. The town is full of carpenters and wages is a getting down some what carpenters can be had at this time say from 6 to 12 dollars per day. Money is worth 10 percent per month and scarce at that but it is thought will be plentyer as soon as the miners begin to come down, and they have continued coming with their piles, some are going home in the next steamer, others will leave their gold here and return to the mines from the best information I can get the miners have done very well this winter. I meen those that have actually worked, not those that have been idling their time away prospecting and gambling but those that actually work, the workers have everaged this winter on the dry digings about one ounce per day. There is a great rush at this time for the mines, and we think of going as soon as the Mary Mitchel arrives and we shall have made sail of our lumber. The Chesapeake Capt. Marvell has arrived, her passage from home was 146 days, sailing days 130. She has lost 2 of her passengers George Benet and Benjamin Marble, George Benet died 3 days out, Benjamin Marble died 2 days before the schoner arrived and was brought in and buried on shore and I was present at the funeral , the rest of her company are all well they have not broke up yet but probably will as soon as they have disposed of their Cargo and settled up their acounts. They have made sail of their lumber at 65 dollars per thousand, laded on the shore and have sold their chees one cast at 60 cts the balance at 40 cts. The chees was the hansomest that has been in market and in first rate order, but the packages to large for the miners chees should be put up in boxes weighing from 15 to 20 lbs, that being about the quantity that miners wish to perchase. Lumber is worth from 75 to 125 dollars per thousand and a large quantity in the market and daily arivings, weeks before last that was rising of three Million arrived and more or lefs daily continues to come. The Mary Mitchell will not probably get here in lefs than a month from this time and possibly lumber will be higher before that time.

There is not much news worth relating to you as it would not interest you. California is a great Country and San Francisco is getting to be a great citty. The population is probably about 30 thousand at this time, and one third live in tents owing to the high price that is asked for houses, provisions are plenty and comparatively low, goods of all kinds are plenty and coming daily.

The Reed Boys are here they arrived about a fortnight ago and are well, they have built a Boat and think about going to the mines this week, write as often as Convenient and inform us how you are getting along.