Reminiscences of Ten Years Experience on the Western Plains... 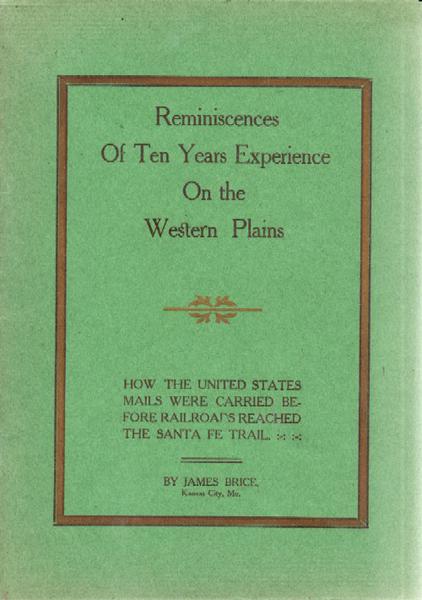 Brice, James. REMINISCENCES OF TEN YEARS EXPERIENCE ON THE WESTERN PLAINS. HOW THE UNITED STATES MAILS WERE CARRIED BEFORE RAILROADS REACHED THE SANTA FE TRAIL. Kansas City. Privately printed. C. 1905. 1st. Printed wraps, 24 pgs. Illustrated. Rittenhouse's Santa Fe Trail 83 says, "Brice began in 1858 as a helper on the mail route of Hall and Porter, operating from Independence to Santa Fe. He spent ten years on the Santa Fe Trail, working for the firm and others, including Barlow and Sanderson." Brice's personal narrative is quite descriptive of his experiences on the Plains. He faced daily dealings with the Plains Indians, their raiding parties, a descriptive account of burying an emigrant family ambushed by Indians, and the daily trials encountered while carrying the mail. The events he describes occurred in Kansas, Indian Territory, Colorado, and New Mexico. He briefly tells about military operations against the Apache, Cheyenne, Kiowa and other Plains Indians and, like other mail carriers of the day, had problems collecting damage caused by Indian depredations. Eberstadt Modern Overlands 51. Not in Graff. A very scarce narrative of Plains lore. Fine, bright copy laid in half morocco and chemise slipcase with gilt stamping on spine. Howes B759; Rittenhouse 83; Eberstadt-Modern Overlands 51.