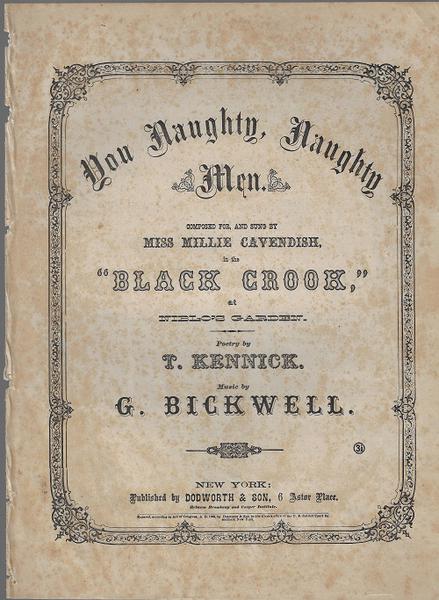 Kennick, T. YOU NAUGHTY, NAUGHTY MEN. Composed for, and sung by Miss Millie Cavendish in the "BLACK CROOK," at Niblo's Garden. Poetry by T. Kennick. Music by G. Bickwell. Pub. by Dodworth and Son. 1866. 4 pgs. Dbd. Minor toning, overall in vg cond. "THE BLACK COOK is a work of musical theatre first produced at the Niblo Garden in New York, Many writers have felt that this is the first popular piece that conforms to the modern notion of a musical. Many of the song in the "Black Crook" were adaptations, but YOU NAUGHTY, NAUGHTY MEN was composed especially for the theatre. The story is a Faustian melodramatic romantic comedy, bu the production became famous for its spectacular special effects and skimpy costumes. It opened at Niblo's Garden on Broadway on September 12, 1868 and ran for a record-breaking 474 performances. (Wikipedia)