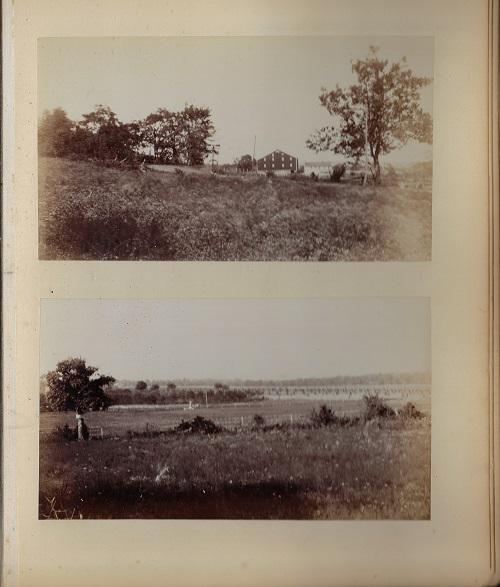 (Civil War) Leonard, Samuel H. Colonel; Private Charles S. Davis; R.B. Henderson; Captain Charles H. Hovey lieutenant Augustine N. Sampson. Extremely rare 13TH MASS. REGIMENT IN MARYLAND AND VIRGINIA 1861-1865 – PHOTOGRAPHIC VIEWS. (1st page) RECOLLECTIONS OF THE THIRTEENTH MASSACHUSETTS REGIMENT. An important photo album based on Civil War recollections as seen through 51 photos of which 10 are from the Battle of Gettysburg. The photos were taken and the album was bound probably about 1890 which is based on the fact that one of the photos is the Union monument at Gettysburg which was dedicated on September 25, 1885. The mounted photos all measure between 7 ½ x 4 inches to 7 ½ x 9 ½ inches. My belief is that the photos were probably taken by Charles H. Hovey who was on the trip. All of them have great clarity and the descriptions are very legible. The front hard back cover is detached, but present with the tips repeatedly bumped. Expected wear to the corners of the thick, almost cardboard pages, with all photos being very fine. Overall very exceptional and in very good condition. Extremely scarce and perhaps the only one published.

Apparently this trip of civil war reminiscing was taken by five members (pictured) of the 13th Regiment Massachusetts Volunteer Infantry civil war veterans. They were Colonel Samuel H. Leonard who was the original commander of the 13th Regiment Mass. Volunteer Infantry and affectionately called “The Old Man”.; Private Charles S. Davis who also served as the Regimental Historian; R.B. Henderson who was Sergeant, 13th Mass infantry, July 20, 1861, then became 2nd Lieutenant on January 10, 1863; 1st Lieutenant, Aug. 4, 1863 and was mustered out August 1, 1864. The fourth veteran was Captain Charles H. Hovey who commissioned as First Lieutenant in July 1861, was promoted to Captain on November 5, 1861 and was wounded in action on September 17, 1862. He was wounded again in action at Gettysburg, Pa on July 1, 1863 and commissioned Lieutenant Colonel of the regiment on April 16, 1864. Finally there was Lieutenant Augustine N. Sampson of Co. B. who led a scout into enemy territory on February 25, 1862. He was elevated to 1st Lieutenant on June 28, 1862 and mustered out on November 4, 1862.

The photo album gives a visual account of the 13th Mass with all of the photos being identified as to where the 13th was during the war twenty five years previous. The first photo is of Boston, MA then to Williamsport, MD ; to Hagerstown, MD (arrived here Aug. 1, 1861); to Martinsburg (March 2-left March 5th), to Sharpsburg, MD to Antietam to Bunker Hill, VA (arrived March 6 – left March 11th) to Sharpsburg, MD to Winchester, VA (arrived March 12 and left March 21, 1862) to Berryville, VA (March 21, 1862) to crossing the Shenandoah on March 22, 1862 through Snickers Gap, to Snickersville, VA to Harpers Ferry, VA and to Gettysburg.

Included within the 51 photos are the following: 1) Home in Williamsport, MD occupied by Col. Leonard and the Provost guard. 2) The “Ensinger Hotel” - Williamsport, MD. 3) View of the Chesapeake Canal at Williamsport, MD. 4) View of where the Union Army crossed the Potomac in February of 1862 – Williamsport, MD. 5) Hagerstown, MD town square. 6) Main Street – Hancock, MD – Captain Fox headquarters. 7) Headquarters of Col Leonard – Martinsburg, VA. 8) Dunker’s Church at Sharpsburg – scene of desperate fighting at the battle of Antietam. 9) “Bloody Lane” at Antietam. 10) Colonel Leonard's headquarters at Bunker Hill, VA. 11) “Old Mill” occupied by Company K at Bunker Hill, VA – March 1861. 12) Earth works occupied by the 13th at entrance to Winchester. 13) Snikers Gap looking west. 14) Harper’s Ferry, VA. 15) The engine house where John Brown was captured. 16) 13th Mass. Vols. Monument at Gettysburg – July 1, 1883. 16) Barn occupied at edge of Gettysburg occupied on the 2nd and 3rd day by Confederate sharpshooters. 17) Photo of the 13th Mass Vols. Monument with Gettysburg College in the background. 18) The “Red Barn” at which the 13th directed their fire at Gettysburg. 19) Scene of Pickett’s famous charge on the 3rd of July, 1863. 20) Conors barn where the 13th regiment wounded were taken at the battle of Gettysburg. 21) The house outside Gettysburg where the body of John F. Reynolds, Major General commanding the 1st Corps, was taken after he was killed. 22) Brian barn near Ziegler’s Grove, Gettysburg which was the objective point, or near it, of Pickett's charge.

Organized at Fort Independence in Boston, Massachusetts on June 16, 1861 the 13th Massachusetts Volunteer infantry left Washington, D.C. on July 30th. During the war the 13th Mass. was engaged in 18 engagements including the Second Battle of Bull Run, Battle of Antietam, Battle of Fredericksburg, Battle of Chancellorsville, Battle of Gettysburg, Battle of the Wilderness and the Siege of Petersburg. Between July 16, 1861 and when they were mustered out on August 1, 1864 they would loose 4 officers and 117 enlisted men killed or mortally wounded and 40 men to disease.

At Gettysburg 5800 Massachusetts men fought with about 1540, or 26% becoming casualties, the third highest total of the 18 Union States that fought their. At Gettysburg the 13th Massachusetts was commanded by Colonel Samuel Haven Leonard of Boston. However he was wounded on July 1 and Lieutenant Nathaniel W. Batchelder took command. The regiment brought 284 men to the field, losing 7 killed, 77 wounded and 101 missing. “The 13th Massachusetts suffered heavily on the northern edge of Seminary Ridge near Mummasburg Road. After an hour of heavy fighting a successful bayonet charge captured over 130 Confederates, but took the regiment dangerously far from their lines and cost them dearly as they fought their way back. Then the collapse of the Union defensive line forced the 13th into a dangerous retreat south along the eastern edge of Seminary Ridge and back through the streets of the town. Only 99 men reformed on Cemetery Hill that evening.” (Sources: Gettysburg Stone Sentinels; Men of the Army and Navy, During the War of 1861-1865 by Thomas Wentworth Higginson; Wikipedia; Antietam – Capt Charles H. Hovey)     $6500.00

Top Photo: Bloody Lane at Antietam. The 13th regiment charged with Hastauff's Brigade from the woods in the distance across what was the n a cornfield to the lane in the foreground. The fighting was so terrible and the slaughter so great that the lane acquired its sanguinary name.

Bottom Photo: Court House on the main street in Winchester, VA. Occupied by Co's B and C.

Top Photo: Earth-works, over which the 13th regiment charged on its entrance into Winchester. This regiment was the first of the northern troops that entered Winchester.

Top Photo: "The Red barn" toward which the 13th directed their fire on the 1st of July 1863 at Gettysburg. It is the barn the monument is supposed to be facing.

Bottom Photo: The scene of Gen Pickett's famous charge at Gettysburg the 3rd of July 1863. The tree at the left is the angle when Gen. Armitage was killed. Beyond may be seen the monument where Col. Ward was killed. Pickett's division advanced from the woods in the distance. The distance from the woods to where the officer is supposed to be standing is about a mile and the march was made under a continuous and terrible fire.