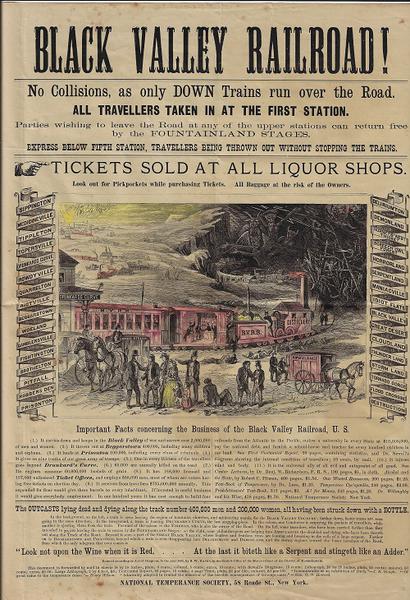 Hanks, S.W. BLACK VALLEY RAILROAD! No Collisions, as only DOWN Trains run over the Road. ALL TRAVELLERS TAKEN IN AT THE FIRST STATION. Parties wishing to leave the Road at any of the upper stations can return free by the FOUNTAINLAND STAGES. EXPRESS BELOW FIFTH STATION, TRAVELLERS BEING THROWN OUT WITHOUT STOPPING THE TRAINS. TICKETS SOLD AT ALL LIQUOR SHOPS. Look out for Pickpockets while purchasing Tickets. All Baggage at the risk of the Owners….The outcasts LYING DEAD AND DYING ALONG THE TRACK NUMBER 400,000 MEN and 200,000 WOMEN, all having been struck down with a BOTTLE. National Temperance Society. New York. 1863. Colored lithograph (13 x 17 inches), light toning and light stains, overall in vg cond.

This allegorical map was created by Stedman Wright Hanks, Nathaniel Rudd and the Massachusetts Temperance Alliance in 1863. The original illustration, used in the broadside, was created to impress upon people the dangers of drinking too many alcoholic beverages.

The temperance movement enthusiastically circulated versions of this allegorical map based on the notion of alcohol as a train ride to destruction, the "Black Valley Rail Road." Passengers embark in the sunny "region of fountains, churches and ministering angels" at the upper left. They proceed through a few stops suggesting moderation (Medicineville, Tippleton) to Drunkards Curve, "the last stopping place. illustrated. From there, the route includes Beggarstown, Gamblersville, Robbers Den, Prisonton, Demonland, Maniacville and finally, Destruction. "Accidents by collisions entirely avoided, as no up trains are run over the road." (Jordan 2007, 81-84). In 1879, the father of the Black Valley Rail Road wrote that "more than three millions . . . have been called for, not including the altered forms of it surreptitiously published by the N. Y. Vinegar Bitters Co." (Hanks 1879, 5). (Cornell University)

Considered by many to be the most successful temperance lecture in the country is this picture of the Black Valley Railroad. Perhaps not a few individuals have studied this allegorical map, complete with scripture verses and shuddered and drew back as they looked upon this representation of the drunkard’s course…. “in the background, on the left, a train is seen leaving the region of fountains, churches, and ministering angels, for the BLACK VALLEY COUNTRY; farther down, faster trains are seen going in the same direction. In the foreground, a train is leaving DRUNKARD’S CURVE, the last stopping-place. In the saloon, one Conductor is emptying the pockets of travellers, while another is ejecting them from the train. Forward of the saloon is the FIREMAN, who is also the owner of the Road. On the left, some travellers, who have been carried farther than they intended to go, are leaving the train to return by the FOUNTAINLAND Stages; on the right, some philanthropists are helping into AMBULANCES the disabled and dying, who have been thrown out along the Track of the Road. Beyond is seen a part of the GREAT BLACK VALLEY, where leafless and fruitless trees are leaning and breaking in the coils of a huge serpent. Farther on is BEGGARSTOWN and PRISONTON, beyond which a train is seen disappearing into DELIRIUMTON and DEMONLAND, and the stormy regions toward the lower terminus of the Road, from which the only telegram that ever comes is “LOOK not upon the Wine it is Red….At the last it biteth like a Serpent and stingeth like an adder.” Although there are various versions of the Black Valley Railroad, this particular one has the eleven “Important Facts concerning the business of the Black Valley Railroad, U.S.” which is not also present on other editions.

The Black Valley Railroad was designed to impress upon the mind, through the eye, the teachings of the Bible concerning the use of intoxicating drink. In reading rooms, depots, shops, schools and families, it becomes a silent preacher setting forth the lessons of warning.