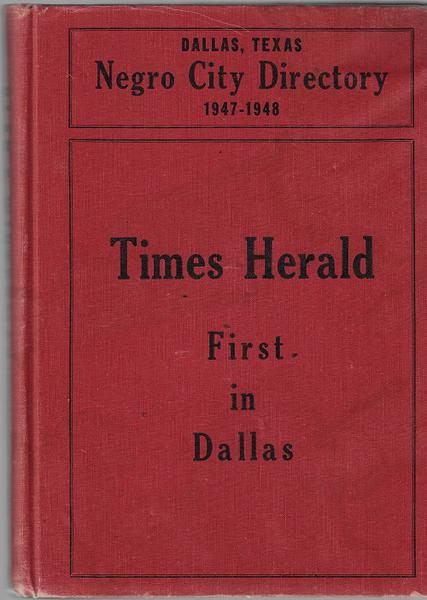 Gilbert, Don. Editor – Publisher. DALLAS, TEXAS – NEGRO CITY DIRECTORY 1947-1948. TIMES HERALD FIRST IN DALLAS. 356 pgs. Don Gilbert also was the editor-publisher of APPLAUSE Magazine. This is the second and final edition of the Dallas Negro City Directory and the only one published by Don Gilbert. His note states “The information in this Directory has been compiled through an intensive survey of Greater Dallas. The methods used insures maximum accuracy.” Hundreds of photos including those of the Dallas First Negro Policemen, Dallas Postal Clerks and Mail Carriers, Dallas Attorneys, a large section on Dallas churches and colleges including Tyler Barber College in Tyler, Texas which was the first barber college of its kind in the Western Hemisphere for the training of Colored Barbers, hundreds of advertisements for every conceivable business in Dallas and a listing of Negro Chambers of Commerce throughout the United states and those of Texas. Insurance companies, repair shops, cafe’s and restaurants, hotels, funeral homes, bath houses, service stations and beauty shops all have advertisements. Between pages 101-319 is the NEGRO CITY DIRECTORY OF GREATER DALLAS – 1947-1948 ALPHABETICAL LISTING, followed by the NEGRO CITY DIRECTORY CLASSIFIED SECTION and the CLASSIFIED DIRECTORY INDEX.

This is one of the finest African-American city guides of the 20th Century. Expected very minor wear, overall in vg cond.