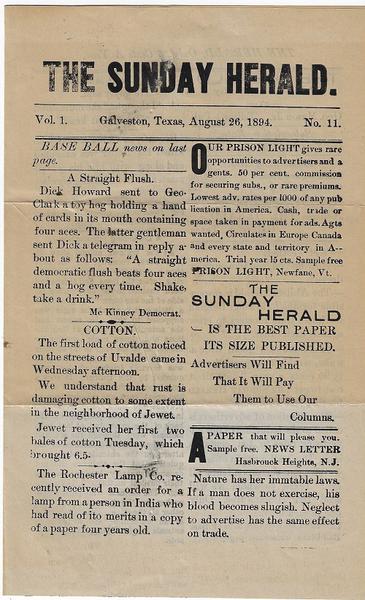 THE SUNDAY HERALD. Vol. 1 - No. 11. Galveston, Texas, August 26, 1894. 4 pgs. 8 1/2 x 5 1/2 inches. George Mason, Jr. Editor and Pub. An excellent copy of a rare printing of an amateur newspaper, printed in Galveston, Texas on a tabletop “novelty” printing press. According to the 1880 census at the time of this printing George Mason , Jr. would have been 17 years old. To receive The Sunday Herald one would have to pay 25 cents a year with payment in advance. The newspaper brings to the Texas reader events from around the world. The articles are tongue-in-check notices of amusing  and odd occurrences that caught the eye of George Mason, Jr. In this particular edition are "A Disturbing Introduction" concerning a trained animal show in New York; and article titled Bayonet and Sword; tidbits of interest such as "Light haired people, as a rule live longer than the dark-haired" or "Five men can easily hold down a lion, but nine are required to hold a tiger.". Also an article titled "Sells Her Three Children". The back or fourth page is of the most interest as it covers important news concerning the game of Base Ball. Articles are "Struck By Lighting" which concerns 7 players in Bowie County who were struck by lightning or "Had To Take A Bath"  concerning the an umpire who refused to start the game until he took a bath. There is a request for local scores and highlights of Texas baseball teams and a complete rundown of National League Standings as of August 25th, 1894. Overall a scarce amateur Texas newspaper in vg cond.  It is not listed in OCLC or Texas Newspapers 1813-1939 a Union List of Newspaper Files. Jacinto Museum of History, Houston 1941. See American Antiquarian Society, Amateur Newspapers.